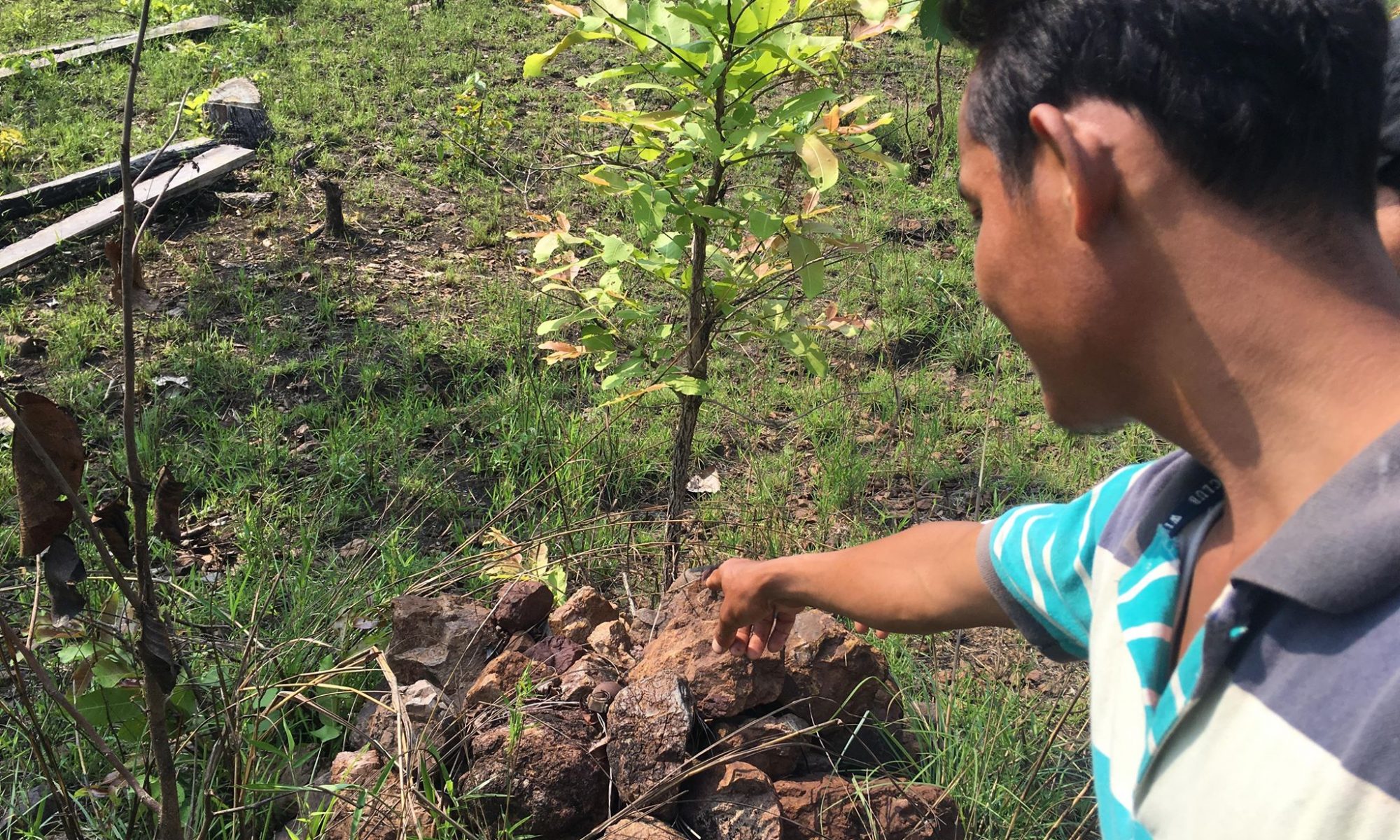 The EOD Teams of CSHD (Explosive Ordnance Demolish – Cambodia Self Help Demining) are like the EMT (Emergency Medical Technicians AKA Ambulance Crews) of the United States. When an accident occurs the EMT group travels out immediately to manage the incident and make lives safe. For the EOD Teams the call comes in and they also make an immediate response.

I asked my question about the steps for a UXO from being found through its disposal to Mr. Chhun Bora, the Training Officer and EOD Supervisor.  He has been with CSHD for 4 years.

This is his answer:

When a villager had found something they think is an explosives then they mark by normal sign and report to Chief of Village or police post/station. After that Police will call request to CSHD office or EOD team. The EOD team when receives the information does not delay and must make an Emergency response. 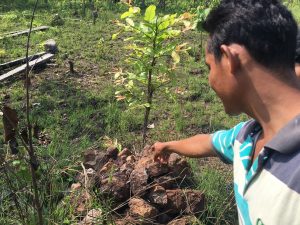 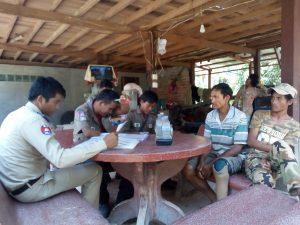 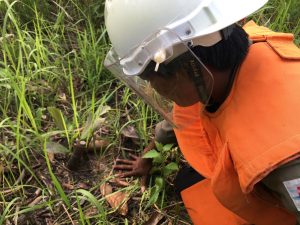 A man or woman is slowly walking through the jungle. “CLICK!” They stop, frozen in their tracks. Someone comes in for the rescue, moves both the character and the landmine to a safe place to be defused, and the director yells, “CUT!”

That is the Hollywood version.

In real life, a landmine would instantly do its job, exploding as soon as it is stepped on, while also taking lots of body pieces with it flying high into the air.

This is the real version.

It is felt that this adaptation of reality came from the action of a “Bouncing Betty”. Once triggered, the explosive device first launches into the air. THEN a few seconds later it explodes waist high, shooting shrapnel in all directions at a high speed. Not only might it take the life of a person next to the explosion but it might cause injury to those nearby.

On April 29, 2018, Aki Ra, founder of Cambodian Self Help Demining Group (CSHD), visited the minefield to review the deminers’ End of the Month (EOM) findings. They were ending mine clearance in Tropang Run Village, and moving to Dong Pha Av Village, Pong Ror Kroam Commune.

The results were a total area of 22,572 square meters returned to safe usage, 4 Anti-personnel mines, 6 UXO, and 2,010 fragments found and disposed of!

In the photograph are Aki Ra on the left, and Naroth, the medic who has been with the CSHD team for about 8 years. 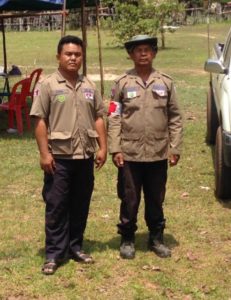 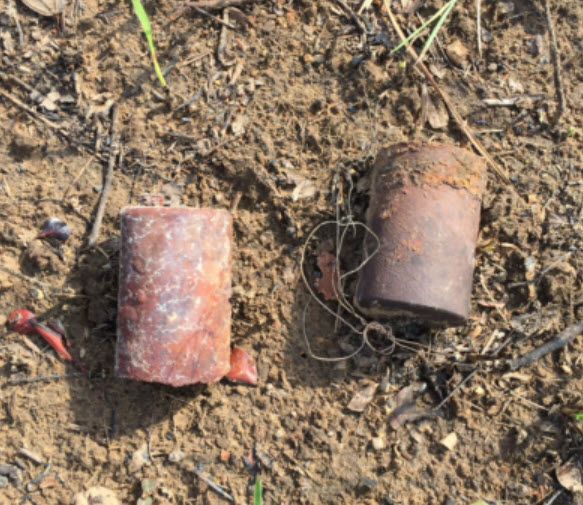 Today, EOD Team 5 had the task of disposing of 3 “Bounding (Anti-personnel) Mines“, sometimes also called a “Bouncing Betty”. While they may look like a harmless tin can, they can actually be lethal. Once buried in the dirt and covered, a trip wire can be attached, or a plunger for a trigger. When activated,  a small amount of explosive inside shoots the ordnance about 1 meter (3 – 4 feet) into the air. It then explodes, shooting shrapnel out at waist height with a range of over 400 feet.  I think you can picture the damage it could do. 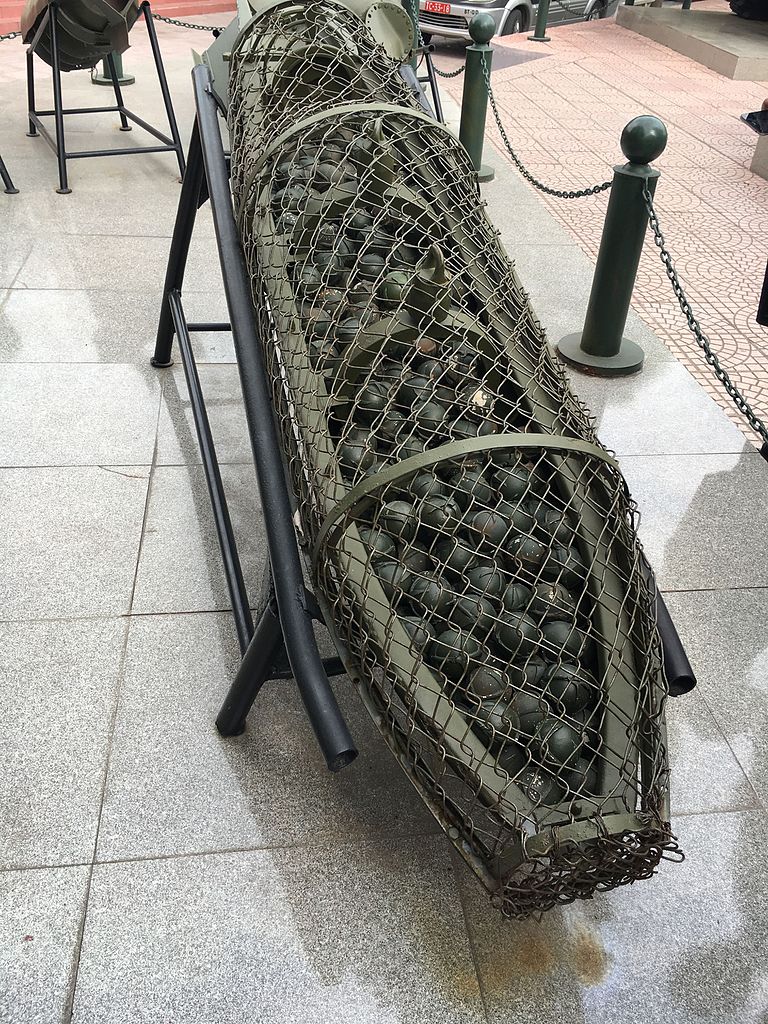 Cluster bombs can contain 200 or more bomblets. Up to 30% of these might not explode. That’s up to 60 unexploded bomblets left in the ground for each cluster bomb dropped. Can you find posts of bomblets found by an EOD Team?

How you can help CSHD

Donations can be one time or recurring payments. Our average donation is less than $25. There is no minimum donation amount, every little amount helps!